I learned about sex and reproduction from my mom. It was the summer between 4th and 5th grades. I remember it vividly. I remember her drawing a picture and showing where a baby’s head is in the womb during each trimester of pregnancy. I remember going back to school in the fall and being very grateful that my mom gave me that talk because all the kids were talking about sex…and now I understood what they were talking about.

So, when Breanna was between 4th and 5th grades, I gave her “the talk”. Luckily I had an anatomy book handy that had drawings and explained reproduction scientifically. Breanna learns well by reading on her own sometimes, so after our DEEP discussion – and it was – I left the book with her and told her she could read it if she liked and to come to me with any questions. She did. She had lots. She still comes to me with questions. I like that. I have this agreement with her that she can ask me ANY question and I will answer it (however, there are some that I have to answer that I am not ready to discuss that with her yet but I will in time). She continues to ask questions. I feel pretty lucky to have the relationship that I do with my 15 year old daughter. She tells me more than I expect. I am certain there are things she does leave out, and she is allowed that. I understand that I don’t get to know EVERYTHING. I simply appreciate what I get.

very different child than Breanna was and is. This is the summer between 4th and 5th grade for her. I knew it was time to have “the talk” because she had asked some questions before and she had made some comments that let me know that she knows a lot already and that I need to fill in the blanks with correct information before someone else fills them in with bad information. I had not set a date but she moved me forward; one day at the library she was choosing books and in between choosing a book about furry animals and another one about childhood games I stroll up alongside her as she is putting another book back on the shelf. She seemed embarrassed so I took a peak at what it was and I pulled it out. The title was “Lets Talk About S-E-X”. I flipped through it and looked at her (still blushing) little face and said, “Ya know, I have been meaning to talk to you about this. If you want to check this book out we can read it together.”

So, we’ve had this book for a couple of weeks and I asked her if she had read any of it and she said “some, it is like a really smart kid explaining it instead of an embarrassed adult” which I thought was a good thing. So I asked her yesterday if she had read anymore and she said she had not but asked if we could read it together later that day. I said we could. My thoughts were:

Am I ready to let my little girl go?
Will she become different when she knows?
Will she feel shame or embarrassment?
Will I explain it in a way she will understand?
What will she do with this knowledge?

Then today I was thinking about Adam and Eve. (Eve was brought up in my discussion with Paige, something about why does it hurt to give birth – it ended with Paige shak 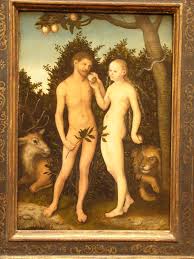 ing her head and saying “darn you Eve”) I realized that if my children had learned about sex and reproduction when I was less than prepared to give them that knowledge…I would have been pretty upset. Imagine all the things that Adam and Eve learned when they ate of that fruit. They learned EVERYTHING before they were meant to. EVERYTHING. They took from God what he would have willing given them in time with proper teaching. They were not ready to receive that knowledge and became ashamed. How sad for God. He knew that their relationship would forever be changed.

So yesterday afternoon Paige and I snuggle together and I begin reading her a book that goes into great detail (with drawings and everything) about boys and their sexual organs, and girls and their sexual organs, and reproduction, and menstruation, and childbirth, and sexual intercourse – the good and the bad, masturbation (wasn’t expecting that one!), STDs, birth control…ALL OF IT. The book was sprinkled with questions and she would read aloud the question while I would read aloud the answer. More than once she would ask a question as I was flipping a page and on the next page was that same question…it was funny. There came times – many of them – when I had to refer to my handy dandy anatomy book to further show her some things. There were times when I had to explain that though the book was correct that our family values were somewhat different and there were some decisions that she needed to make way in advance before she was faced with certain situations.

Our discussion and reading were interrupted by dinner and then continued directly after and went until her bedtime. She was great. She shared some things with me that surprised me, at first and then I was thankful for it because it meant SHE IS NOT ASHAMED OR EMBARASSED. That was when I felt good about our discussion. We ended with the “Puberty Puzzle” they had in the back of the book – more a quiz/review and she was able to answer all of the questions. It was a great way to end. I feel comfortable with her having this knowledge and I believe that if she has questions she will come to me.

Sometimes I feel like I over inform my children.
More often I find that particular fear has no real basis.
There are things they need to know, the question for us as parents is really “WHEN do they need to know them?”
Knowledge changes people. Good or bad, it changes people – sometimes a little, sometimes more.
As a parent you have to be willing to be the catalyst for that change and accept the person that comes out on the other side of it