I have a hard time accepting that it has been two whole years since we were blessed with the wonder that is YOU! As you can see, I am officially accepting the title of “Nawnie” and yet I know that somewhere down the line you could call me something else (hopefully always something kind)…for now, it is Nawnie.

Because I was so tardy with my last post and am RIGHT ON TIME with this one, I am trying to find out what, if anything, has developed along the way.

You are still selective in your use of language. But you are starting to come around. My favorite is when you start toddling in a direction and then turn around and say “C’mon.” When a toddler says “C’mon” – you follow. I will enjoy your desire for my inclusion in your adventures for as long as I can.

Other favorite things for Papa and I would be the way you say the words “shoes” and “keys” – you emphasize the wrong syllable. Shoes sounds like shoose and keys sound like keece. Exhibit A: (note… the word is uttered around 40 seconds in but the video goes on quite a while beyond “shoes” but for those who love her and don’t see her often, I include the entire interaction that led up to choosing her clothing for the day)

I love how Papa tries to teach you which shoe goes where and how you say “Thank you” in context…and the way you cock your head and look at me like I’m adorable when I ask you to say “Apple Jacks” – perhaps I am easily amused.

You have very specific expectations for our cats. (Yes, I always have to have a cat update) Often telling them to “go way” when they are in a space you don’t think they should be, and just as quickly you try to smother them in your love. Speaking of cats, your mother shared a story of making smores at home and you only wanted the marshmallow, but then you spit it out, squished it in your little fist, and then tried to pet the cat…Mummy saved the cat.

On a recent visit, we took you to breakfast at PEGGS downtown. You are NOT restaurant trained. Apparently, you don’t do meals, you simply graze. We chose the location so that Papa and I could participate in Pokemon Go Community Day. (Don’t judge) Little did we know that there was going to be a Pride Festival there as well – you had dressed appropriately for the occasion (see following GIF) and you loved all the colors and the dogs that people were kind enough to allow you to pet.

You attended the family reunion for your paternal great grandmother’s (aka Gramma Lois) family. You paid attention to no one new. Pretty much dragged Papa to wherever you wanted to go…and of course he followed. 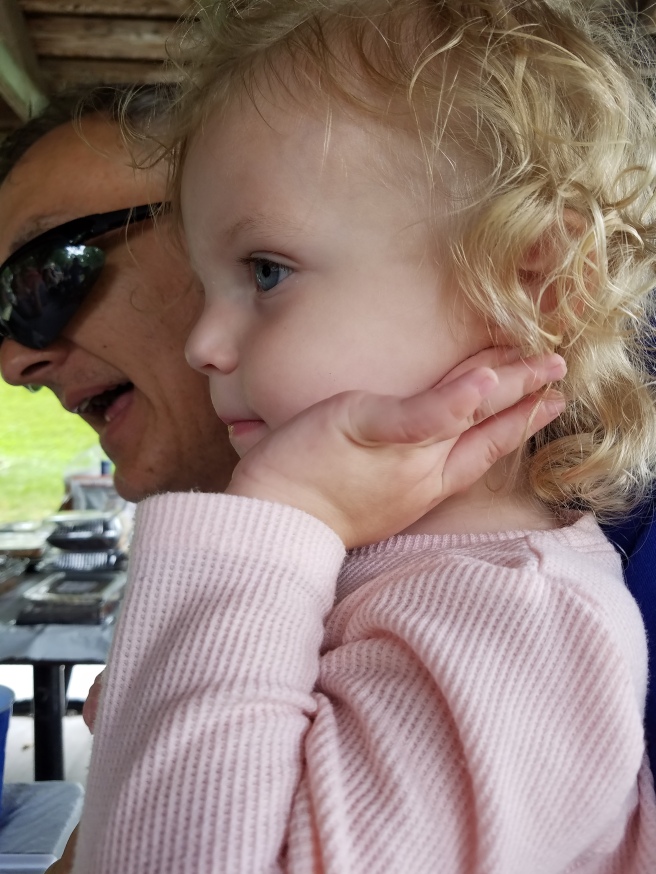 I need to be more kind when including Papa in your photos…these are not good representations of how handsome he is.

Speaking of Papa, on that same day of the reunion, he actually left you alone with me for a few hours! Now, understand that when you come over Papa follows your EVERY STEP and it is exhausting! I had come to the conclusion that you were a very busy child. Papa is very nervous of possible injury or mess or…who knows…but he takes his responsibility of you VERY seriously. Me, I do a perimeter check to make sure there are no knives or chemicals that you can reach and I let you go. While Papa was trying to leave, he was so convinced that his leaving would throw you into a tizzy he kept telling me to distract you so that he could leave. I ignored his requests and just told him to go. So, when after the reunion he left you in my care, I actually sat down on the couch, turned on Puppy Dog Pals and left you to your own devices you were pretty chill. Oh, and at one point I sneezed and you said “Bless you” – oh my heart! Back to you being chill…so chill that you hung out next to me and admired the softness of my pants (which you also kept pointing to and saying something that sounded like “cute” – great taste by the way) and you lay your head on my leg and actually WATCHED THE CARTOON!! I have never seen you watch a cartoon for more than a minute. Don’t get me wrong, you were not motionless during this time, but you stayed in the same room and you were content to do your own little thing without injury or destruction! We practically BINGED the ENTIRETY of Puppy Dog Pals that was available on Netflix! Holy Cow! This was a MONUMENTAL MOMENT! Angels were singing. Glory to God was given! You were still.

No, I do not plan to use the television as child care when you come over. I learned that was wrong AFTER raising Aunt Pixie. It’s okay…she survived and is very smart. She even enjoys NATURE!

That wraps it up for now. Papa and I will come to see you later, maybe I will edit this post to include a photo of you on this special day.

It has been quite the whirlwind of a month.  Rather than write a novel about things that have happened, AND because I am EXTREMELY late with this post (Nine days. This might be a record)  I am going to do some bullet points with the exception of this first revelation:

You are calling me something between Nani (Nah-nē) and Nawnie.  Though Nani in Hindi actually means “maternal grandmother” which is incredibly accurate for a child of your age that has been raised in the midwestern part of the United States of America. I will accept it if that is where you land, but I am encouraging the Nawnie version for two reasons:  First, it is phonetically similar to what my mother calls me (Dawnie) and I am very likely to respond this moniker and second, I do not speak Hindi.  I do take comfort in knowing that, as a Hawaiin name, Nani means “beautiful” or “splendor” – ultimately, either way, these two things you are calling me are a WIN!

You spent an entire week with your paternal grandparents leading up to Mother’s Day. It was traumatizing for your mother, and you my dear have raised your Fit Throwing Level to Professional since that visit.  Oh. MY. WORD!! You went from Amateur straight to PRO without even touching on Intermediate.  It could be a coincidence or you experienced a

level of spoiling that you simply were not receiving from your Indiana clan and FOR THE HONOR OF GRAYSKULL you are determined to regain some spoil action. Let it be known…we aren’t having it.

You had the opportunity to spend a great deal of time with Aunt Pixie who was visiting for 10+ days.  You were the highlight of her visit. The first time you fell asleep and she was able to snuggle you like this in almost a year…I think her heart grew three sizes that day. (Shout out to Dr. Seuss!) 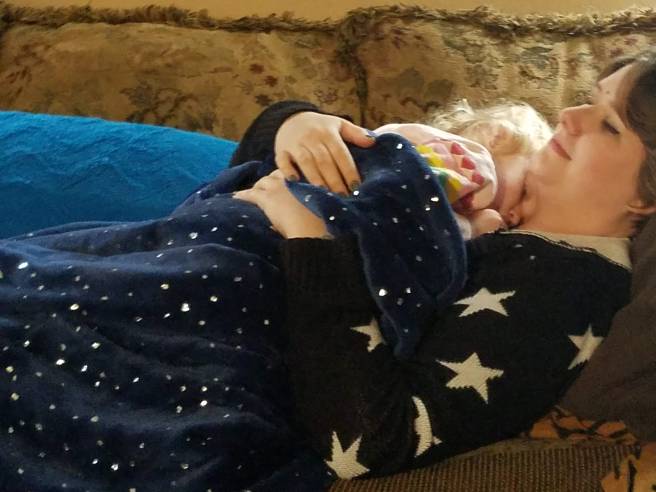 As your grandparents, I feel that we have spent a great deal of time with you this month.

We visited the zoo with you…chipmunks running around were a big hit. As were the average local birds flying around. Goats scared you. The rest of the animals grabbed your attention as long as they were moving and lucky for us it was a coolish overcast day and many of the animals were out and active! 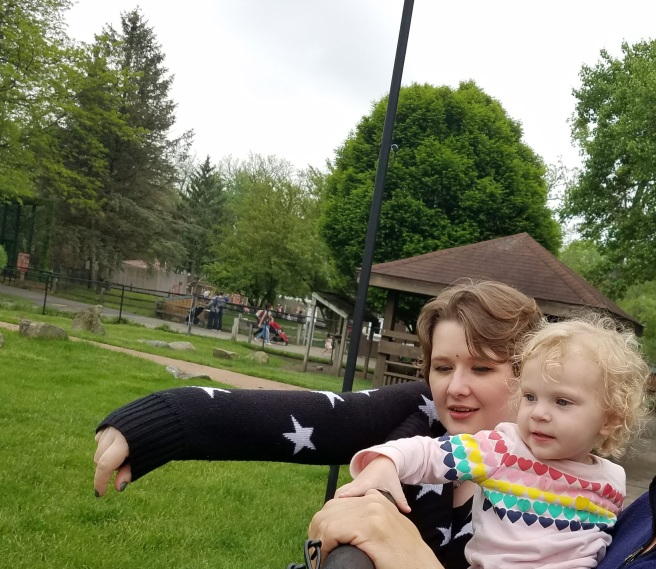 As you can see in the above picture…I do believe I have a fellow curly girl in the family.  Someday you will appreciate your curls, as you don’t have the coarse texture with them…You are welcome.  Mummy is learning how to properly manage and encourage them.

You’ve spent quite a bit of time at Lauren and Casey’s where you met all of their farm animals and even rode a pony…or a horse, I am not sure…an equine of some sort.  Your cute shoes were muddy as …well, they were very muddy and even taking my scrub brush to them barely made a difference in their discoloration.

You have learned the phrase “I love you” but in your language, it sounds like “Wuv you.”  Mummy did capture this on video and shared it with me, but you are totally naked in the video and I am not posting that for the world to see.

You don’t like us having gates up at our house.  Prior to now, we have had some rudimentary pseudo barriers to keep you from going downstairs or into rooms we wanted you to stay out of…so, seeing a gate at our house for the first time, let’s just say you were less than happy about it.

Other fit worthy things include:

We have figured out that you are afraid of the sound of a train whistle…which is unfortunate because that sound happens a lot at our house even though we don’t live that close to a train track…sound carries.  You just WAIT for a low flying plane!  The trains will seem like a pleasant lullaby to you.

I feel like I am forgetting some things but at this point…my brain hurts trying to recall all the things that make up the wonder that is you.

OH WAIT!  New Nickname… NattyRoo.  I believe there is a reason behind it but I cannot think what it was.  Will consult with Mummy and perhaps update this post.

Until next time Roo…