I subscribe to a blog called “Makes Me Think” – sometimes I wonder if people are just making stuff up but it is an interesting and sometimes heartwarming, sometimes heart-wrenching but quick read.  This was on there today and it bothered me.

” Today, when I told them the truth, my parents stopped loving me for being me.”  ~ by lost

The comments section just did not seem the place to respond to this but I am betting that many kids have felt this way and I simply wanted to respond as a parent.   So here it goes:

I am so sorry you feel that way.  I can only imagine your pain.  As a parent, I would like to give a possible explanation of what you may have perceived as an end to your parents love.  It could simply be that they are mourning a loss.   You said that “when I told them the truth” which means that until that moment they had been experiencing something that was not true.  Maybe, an image of their child that was false?  So, in that moment of truth…they experienced a loss.  They need some time to grieve that loss.  When you exposed your truth, you likely were seeking acceptance.  I ask you to give them time.  Acceptance does not mean that they have to understand, agree with or celebrate your truth.  It means that it is not their responsibility to decide upon it.  Now they may need some time to get there and are now trying to sort through what the “truth” is.  You did not decide overnight to expose your truth, you likely took time to decide. Allow them THEIR time to absorb it.  I would like to share with you something that I have had to say to my own child when I have reacted poorly to something:

“Just remember that I am human too, and I mess up.  I react to my emotions.  My reactions do not determine your value and worth nor are they a measurement for my love for you.” 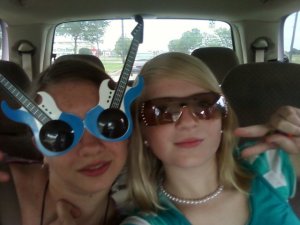 Every morning and most afternoons I have the privlege of transporting a couple of teenage girls to high school.  For the purpose of this blog, I will refer to them lovingly as Binky and Bonzo.  Back in the day, I used to blog the occasional CRAZINESS that was my drive time with Breanna (see posts under the category of Driving Miss Crazy).  I don’t know what this will look like.  I can only tell you that having two teen girls in the car is somewhat different than having one teen girl in the car.

Their personalities are different.  Not just from that of Miss Crazy but also from that of each other.  It creates some interesting, funny, intense, and odd conversation and also the occasional bickering match.  Always fascinating, occasionally frustrating.  Under it all, they love each other.    Over it all – THEY SING VERY LOUDLY and are convinced that Katy Perry is stalking them (not really, it is just that every time they get in the car, one of her songs comes on).

Topics in the past have included:

For example:  When asked last week, how their day went…Bonzo stated “Disturbing” and when asked what it was she answered that she could not tell me because she was told something in confidence.  So, conversation continued to be cryptic and became at the least very concerning.  They were questioning whether or not something was even legal.  So I said…”Listen, you do not have to give me names just tell me what it is and I will let you know if it is legal or not.”

For the sake of privacy of this person, I will only tell you that it was ILLEGAL what this person had done and so I had to explain what it was and why it was illegal.  Teaching moments like this are what every parents dreams are made of.

Car rides with teens…never what you expect them to be.

You know, sometimes it just sucks being human.  So limited in our abilities compared to the One we were made to be the image of and yet we attempt to make ourselves responsible for things beyond our limitations.   (Can you tell that I am talking about myself yet?)

It is funny when you discover your weaknesses.  I found that I am capable of handling many things and I don’t generally take criticism as anything more than constructive and rarely do I take things personally.  However, in the face of the possibility that I have CAUSED stress or hurt…IT WRECKS ME.

I think it funny that I am in the middle of two things at church, a series called How To Wreck Your Life and a spiritual growth group based on a book The Me I Want To Be.   I have learned that I have what is called a Spiritual Inhibitor and mine apparently is INACTION.  I was not seeing it and neither did anyone I asked.  So I was trying to see where that plays out in my life and asked God to show me.  I realized that deep down, I know that it is a part of me and I actually OVERCOMPENSATE by actually RUSHING to action for fear of not acting.  I don’t like having weaknesses.  I tend to try to flip them.  Sometimes this does not turn out very well.  In speech or in action.  When pressed, I might just rush THROUGH something that I should have taken more time THINKING about for fear of overthinking it and then become unsure and then ignore it and do nothing.

Sometimes an immediate response may not necessarily be the best one.  I know that my intentions are good, but my actions or words don’t match them.

Then, I beat myself up about it.

I am growing here people, I am growing.  Apparently when I asked God to show me where my “spritual inhibitor” played out in my life…he provided a week in which I had to deal with it a couple of times.  YAY ME!

I think I have learned what you wanted me to see.  Thank you for answering my prayer.  Would it be possible to end the lesson here?